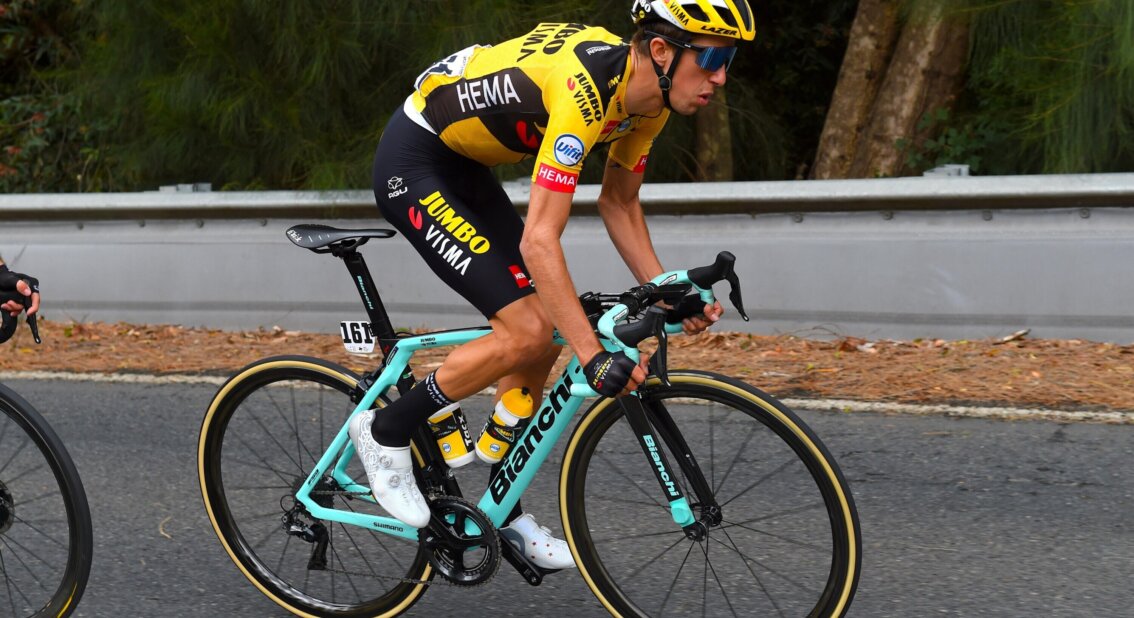 George Bennett has climbed to second place in the third stage of the Vuelta a Burgos. After an exciting stage, the leader of Team Jumbo-Visma only had to give in to the talented Belgian Remco Evenepoel on the steep final climb of the Picón Blanco. After three stages, Bennett is also second in the overall standings at eighteen seconds from the Belgian.

In the short but tough stage with the necessary climbs along the way, a leading group of nine got away fairly quickly and got a maximum lead of eight minutes on the peloton that controlled the break all the way. In the last fifty kilometres, there was some chaos because the weather suddenly changed and the wind strongly picked up. Due to this the peloton split to bits in echelons. Team Jumbo-Visma initially missed the front group, but managed to bring their two leaders back to the front group, bringing them in an ideal position to the final climb. Bennett rode a strong climb, kept his pace but had to give in to Evenepoel in the final kilometre.

“That was a great stage. I am happy with this result”, Bennett said. “It was a fast stage, very hot and very hard. The guys did a really good job at guiding Sepp and me through the echelon chaos and getting us in a good position to the final climb. In the echelons, we were in a good group and I had some great support from the team. As a result, I was certainly able to save a lot of energy. It was a first class ride to the bottom of the climb, so to say. On the climb Mitchelton-Scott had a very high pace. It was a matter of keeping my rhythm and trying to follow them. When Chaves attacked, I didn’t hesitate for a moment, but Evenepoel was just too strong today. We will see what is in store for us in the coming days. It are going to be two more hard days.”

Sports director Arthur van Dongen thought it was a thrilling stage. “We have ridden a very good stage as a team. The breakaway was perfectly controlled by Team Ineos and Bora. We rode attentively in the front of the peloton all day to limit the risks. But when the wind picked up and the peloton was split to bits in the echelons there was a lot of chaos and spectacle. The guys remained calm and supported George and Sepp as well as possible. George was very, very strong today. It was a good final climb for him. During the next two days we need to stay sharp and focused, especially with the wind here in Burgos.”